Below is a map of the city of Brandfield. City planners have decided to build a new shopping mall for the area, and two sites, S1 and S2 have been proposed.

The map illustrates plans for two possible sites for a shopping mall in the city of Brandfield. It can be seen that the two sites under consideration are in the north and the south east of the town.

The first possible site for the shopping mall, S1, is just north of the city centre, above the railway line, which runs from the south east of the city to the north west. If it is built here, it will be next to a large housing estate, thus providing easy access for those living on the estate and in the city centre. It will also be next to the river that runs through the town.

The site in the south east, S2, is again just by the railway line and fairly close to the city centre, but it is near to an industrial estate rather than housing.

There is a main road that runs through the city and is close to both sites, thus providing good road access to either location. A large golf course and park in the west of the town prevents this area from being available as a site.

The map below shows the development of the village of Ryemouth between 1995 and present. 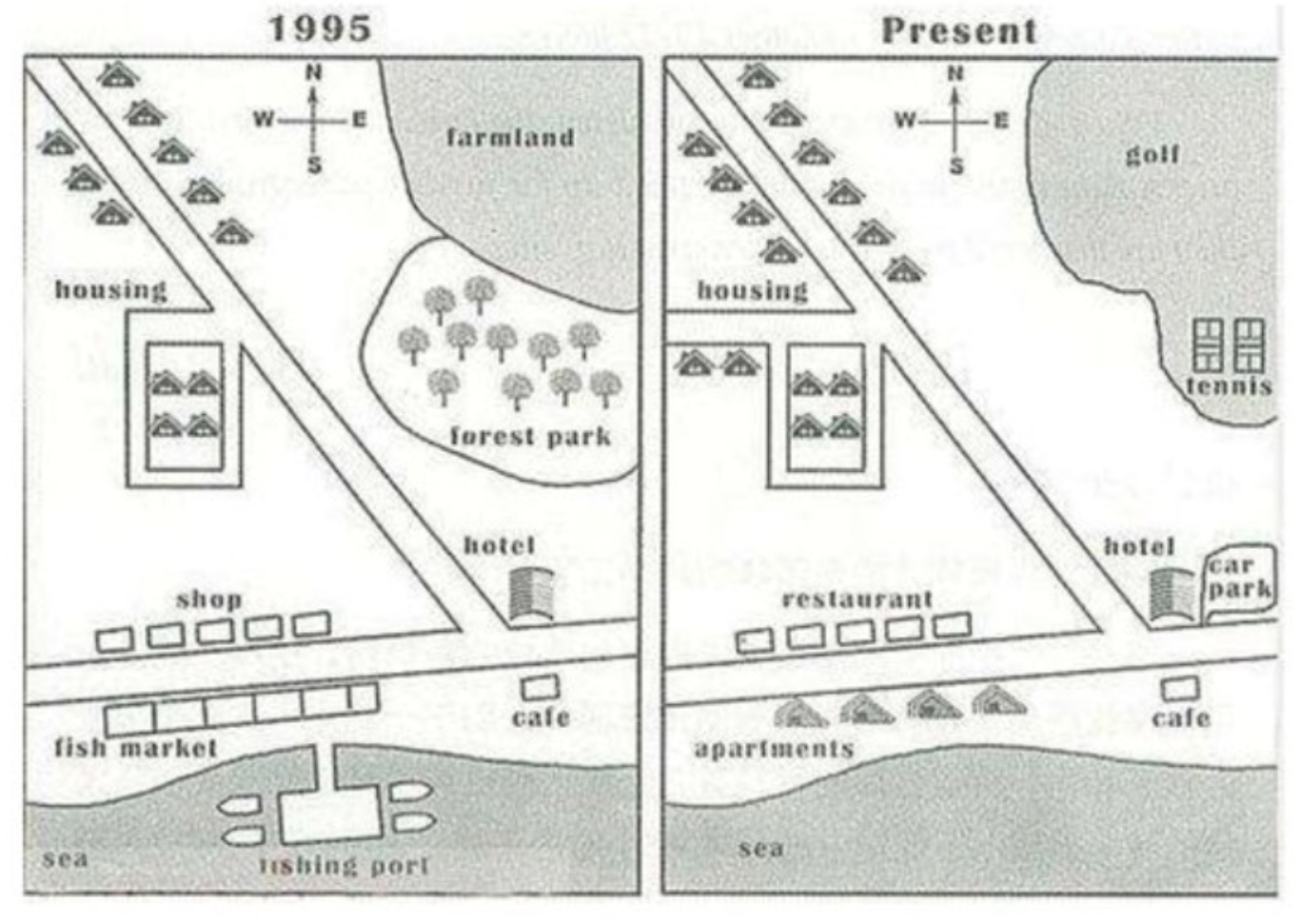 The map shows how a village called Ryemouth has developed over the last twenty-five years. There have been several changes, the most noticeable being the increases in accommodation, the elimination of the fishing industry, and the introduction of sports facilities.

In 1995, to the south of the village where the sea is there was previously a fishing industry, with a fishing port and quite a large fish market as well. Next to this was a small cafe. On the other side of the road running by the sea stood a line of five shops and a hotel, while situated in the north east part of the village was farmland and a park with trees. The main housing of the village was located in the north west around a main road that runs from the coastal road, with twelve houses, four of them encircled by a smaller side-street.

Turning to the present day map, it can be seen that the fishing facilities have all gone, being replaced by four apartments, and the shops have become restaurants. The cafe remains, as does the hotel, albeit with parking facilities which it did not have before. Having been converted into a golf course, the farmland has now gone, while the forest park has been removed to make way for tennis courts. Although the old houses remain, new ones have been built, along with a new road with two new houses beside it.

The two maps below show an island, before and after the construction of some tourist facilities. 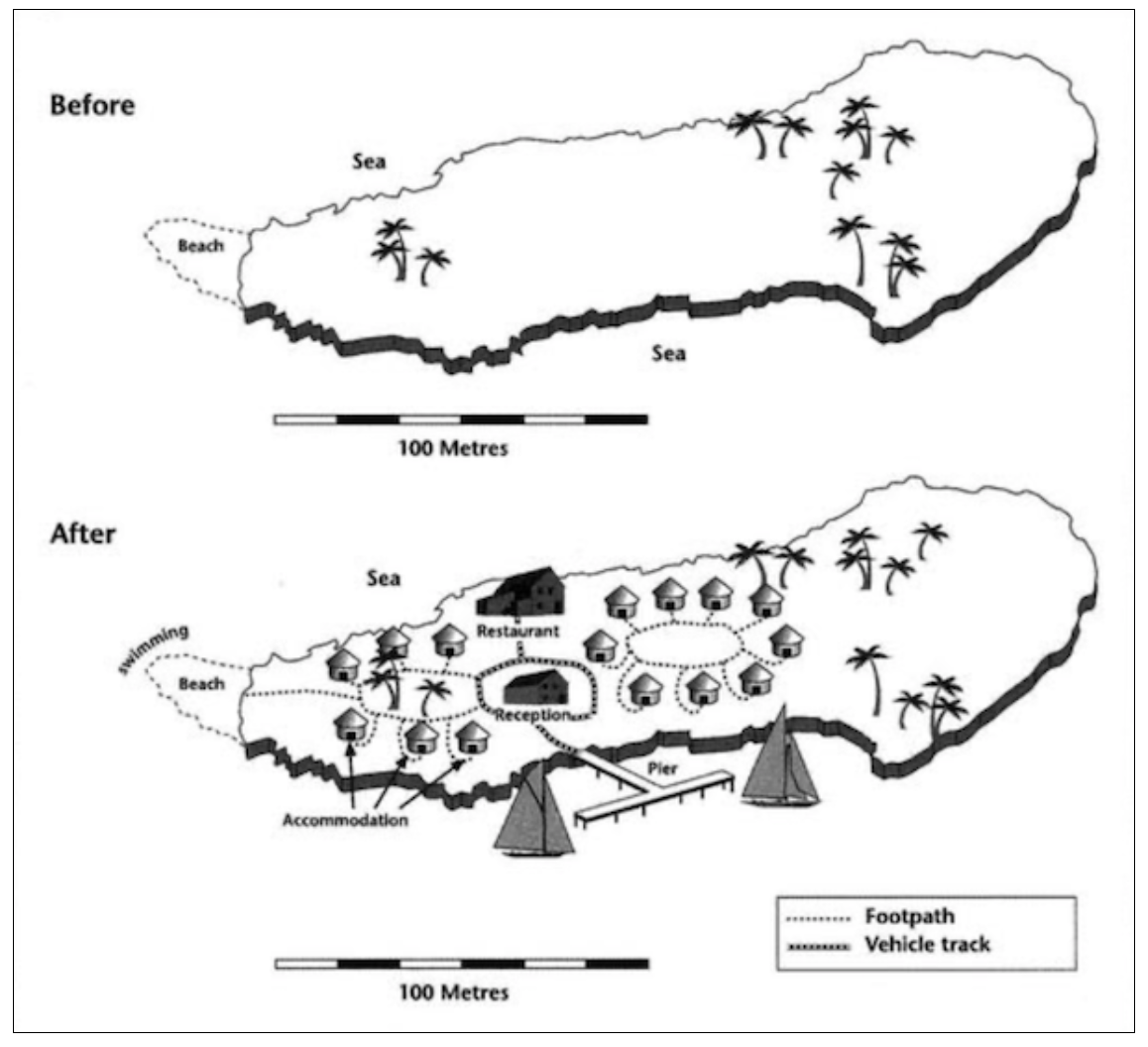 The maps illustrate the changes that have occurred on an island due to the building of facilities for tourists.

The island originally consisted of just palm trees and the beach, yet now, although the palm trees remain, it hosts a wealth of attractions for holiday makers, from restaurants and swimming to accommodation.

The island is approximately 200 metres long, with a small beach on the western tip. It was deserted before, with only a scattering of palm trees. Now though, there is an abundance of places to stay in the form of fifteen beach huts situated in circular patterns in the centre of the island and to the west.

Between these two sets of accommodation there is also a new large restaurant and a reception building, both served by new vehicle tracks. Situated in the south is a t-shaped pier for ships to dock, and sailing boats are now evident in this area of the sea. Footpaths have also been constructed, which traverse the island, leading to the new buildings and also the beach, where tourists can now swim.

The plans below show a public park when it first opened in 1920 and the same park today.

Summarize the information by selecting and reporting the main features, and make comparisons where relevant. 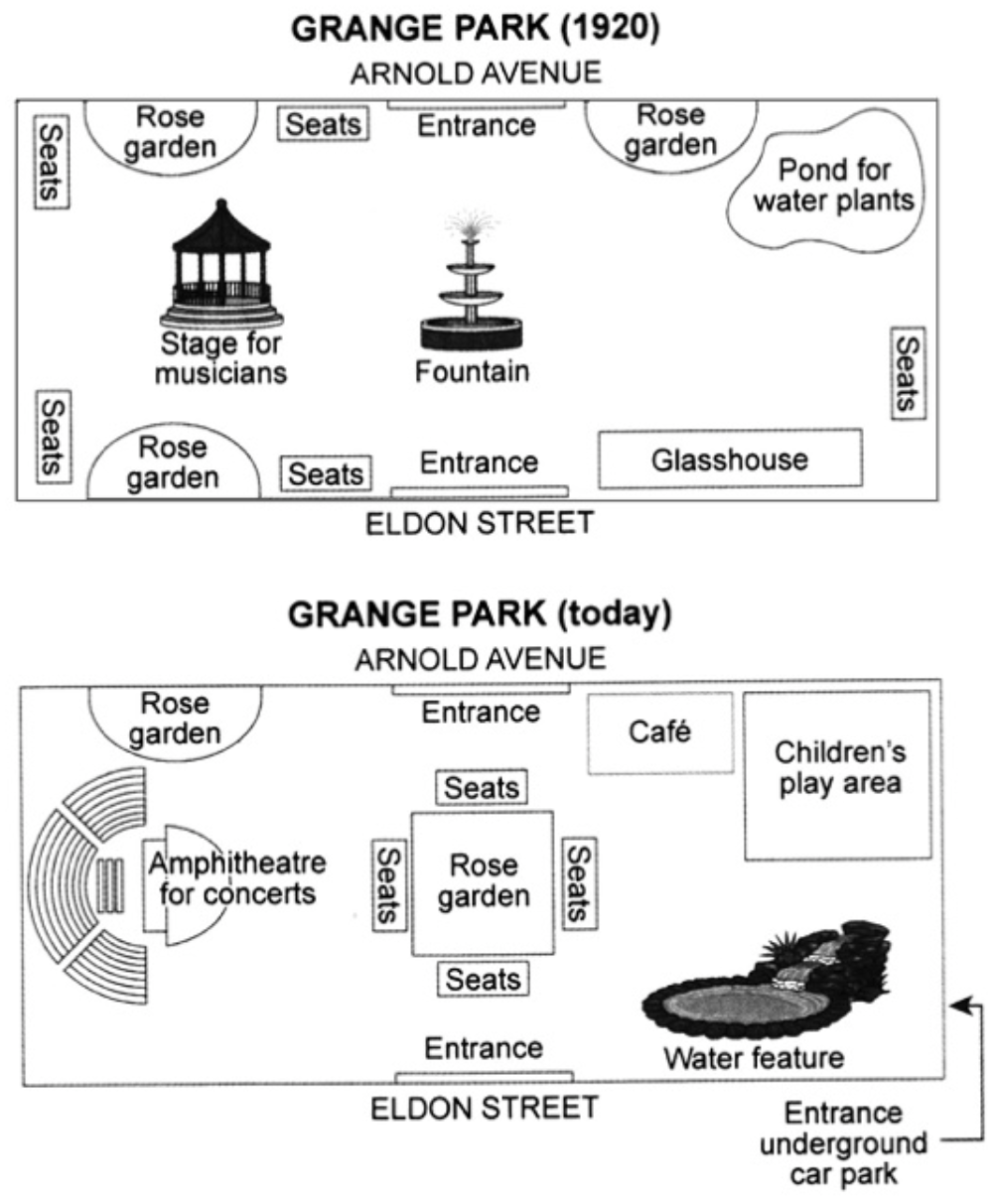 The map compares Grange Park in 1920 with the current time. Several features have moved, but a main change is the development of an amphitheatre, a water feature and the removal of the fountain.

Looking at accessibility, the park kept it’s two original entrances on Arnold Avenue and Eldon Street that have been there since its opening in 1920, but on today’s map we see they have added underground parking for cars off of Eldon Street as well.

They kept an entertainment area in the same location in the west of the park, though it has been upgraded from a stage to a full amphitheatre. The park’s water attraction, formerly a pond with water plants in the north-east corner, has moved and is now a water feature where the glasshouse once stood.

While today’s park no longer features the central fountain, it does now include a cafe and children’s play area for visitors to enjoy, along with plenty of open space around the features.. 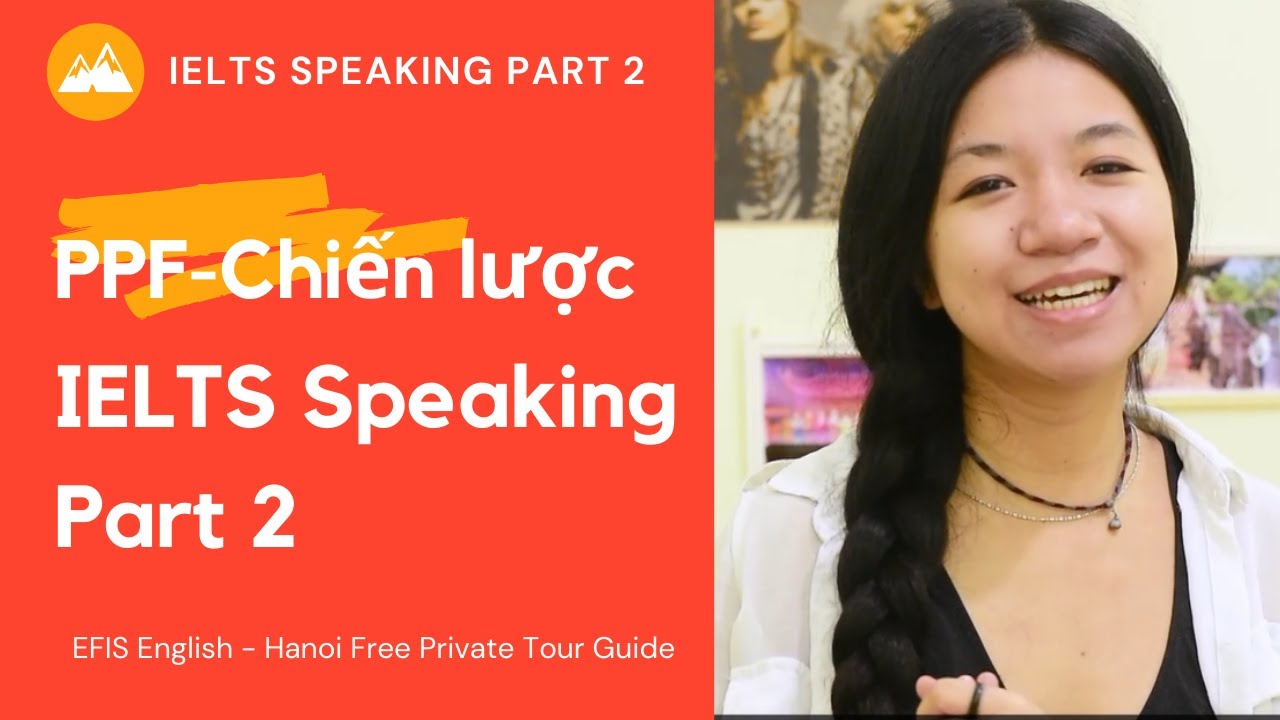